So, today is April 26th, and we hope to launch the first week in June. 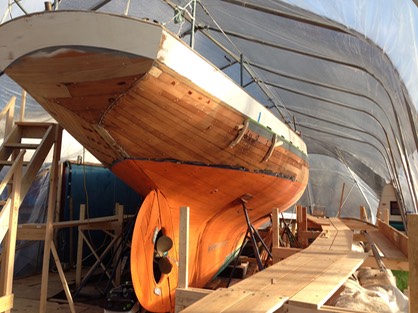 The hull is starting to really look like a boat 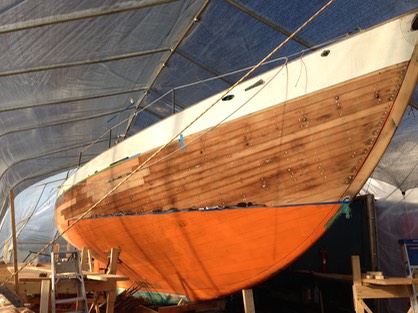 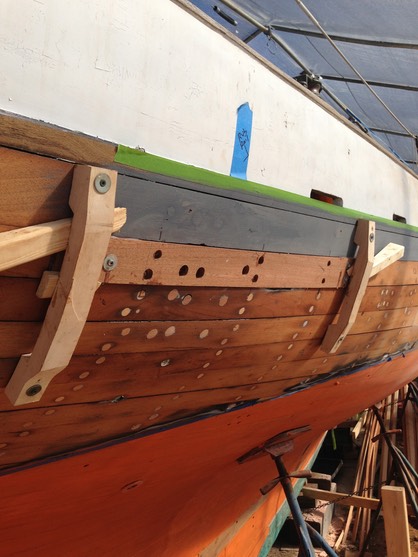 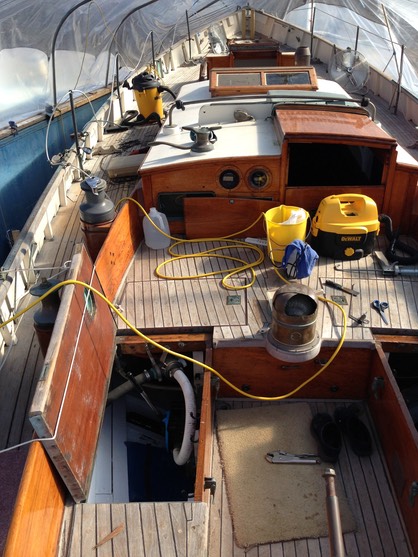 The deck’s a bit full with different projects 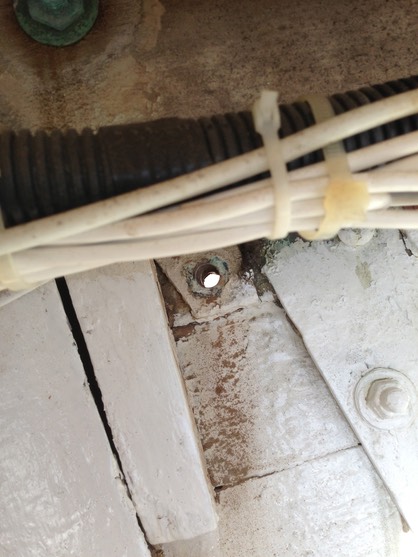 The one bolt in the chain plate I could actually see!

I’m mentally keeping my options open on that one because otherwise I think I’ll crump under the pressure of a timeframe. I just am working like an ant – constantly, it seems. Henry keeps giving me a countodown, which I don’t find helpful, but it seems to inspire him, so to each his own.

Henry pulled the last fastening from the planks, and so that is officially complete. He actually has a few more to put in, but only about 6, at tricky places (a butt block needs to be replaced, and a section of frame needs some epoxy). He’s cutting out all the white lead between the keel & the boat to make sure the keel bolts look ok. So far so good.

The final phase of re-fastening revealed a bunch of areas on the hull which weren’t too pretty, so Chip’s been back to replace a few more planks.

The one decision we made when we reailized last July that there wasn’t a chance of launching last summer, was that we would address the rub rails. In and of itself, it isn’t a huge project, but added to everything else, it tips the cart. We both wanted to see what was going on underneath the rails, and fortunately only found two spots which were in need of repair. The rails themselves were very different. The port side rail was in great shape, but the startboard side rail was like swiss cheese, so I don’t know if the port side had been replaced once or if the prevailing winds just kept the starboard side in the sun more. Not sure. We did learn from Tad that the rails were only added for a trip to Europe, to keep the hull safer in the canals.

I have started to address the re-caulking of the deck seams. I’ve been afraid of this project for months now, and so when we returned from California, I just decided to address it in earnest. Now that I have, I am realizing that it’s going to be ok. It is a big job, and will take me a while, but I’m highly motivated to have the boat dry below, so I’m the best person for the job since I have such a vested interest in the seams being tight and dry. The mystery as to why it was wet below at the nav station was easily solved – a huge, gaping opening in the outboard seam on the deck.

Still left on my list is the varnish below, the deck beams, lining the fridge with some insulation, and more. In general, we haven’t addressed systems – heat, head and the like. I do have replacement LED bulbs for all the lights, and have finally figured out how to glue those in. We’re excited to be going LED – the draw on the batteries with the old bulbs was intense.

Henry still has to address the spars – the main needs a small splice, and the mizzen needs a few repairs. Then all spars need another coat of paint.

Not to mention the hull seams, primer, and paint. Still have to strip the bulwarks but that will only take a few days.

The list is pretty long, but we’re just working our way through it. We can both start to feel the end and are getting excited to launch. I’m looking forward to focusing on business again 🙂

Make sure you check out the photos – many more than I could put on this page. 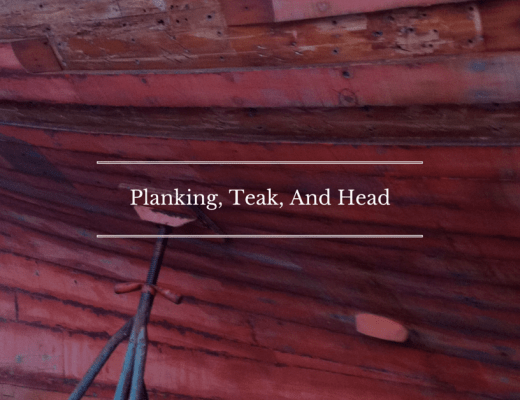 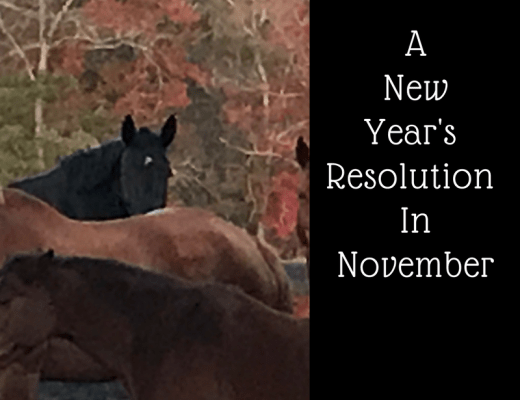